A Semester of Unknowns—Financial Crises, Admissions Troubles, and Skyrocketing Coronavirus Cases Puts F&M in a Bind for the Fall

This past Wednesday, Franklin & Marshall President Barbara K. Altmann announced the administration’s decision to return to campus for the fall semester. The College plans to conduct the semester with a blended model of in-person learning and online instruction, a hybrid-type option that about 25% percent of U.S. colleges have said they plan on using for the fall semester. The plan, President Altmann said in the College’s official statement, “prioritizes health and safety, academic integrity, and the student experience.”

In her email to students last week, President Altmann acknowledged the likelihood of the coronavirus being on campus, saying that “F&M cannot and does not guarantee a COVID-19 free environment on our campus .” However, if the past week is any indicator, the College can all but guarantee that COVID-19 will be on F&M’s campus come August.

This past week, the seven-day average of COVID-19 cases reported in the U.S. reached a record high for the twenty-seventh day in a row. On the day that President Altmann announced F&M’s decision to return to campus in the fall, 54,357 new cases were reported in the U.S.—the country’s highest single-day increase yet. On Saturday, cases reached 57,718, topping the record set just two days earlier by more than 3,000 cases. 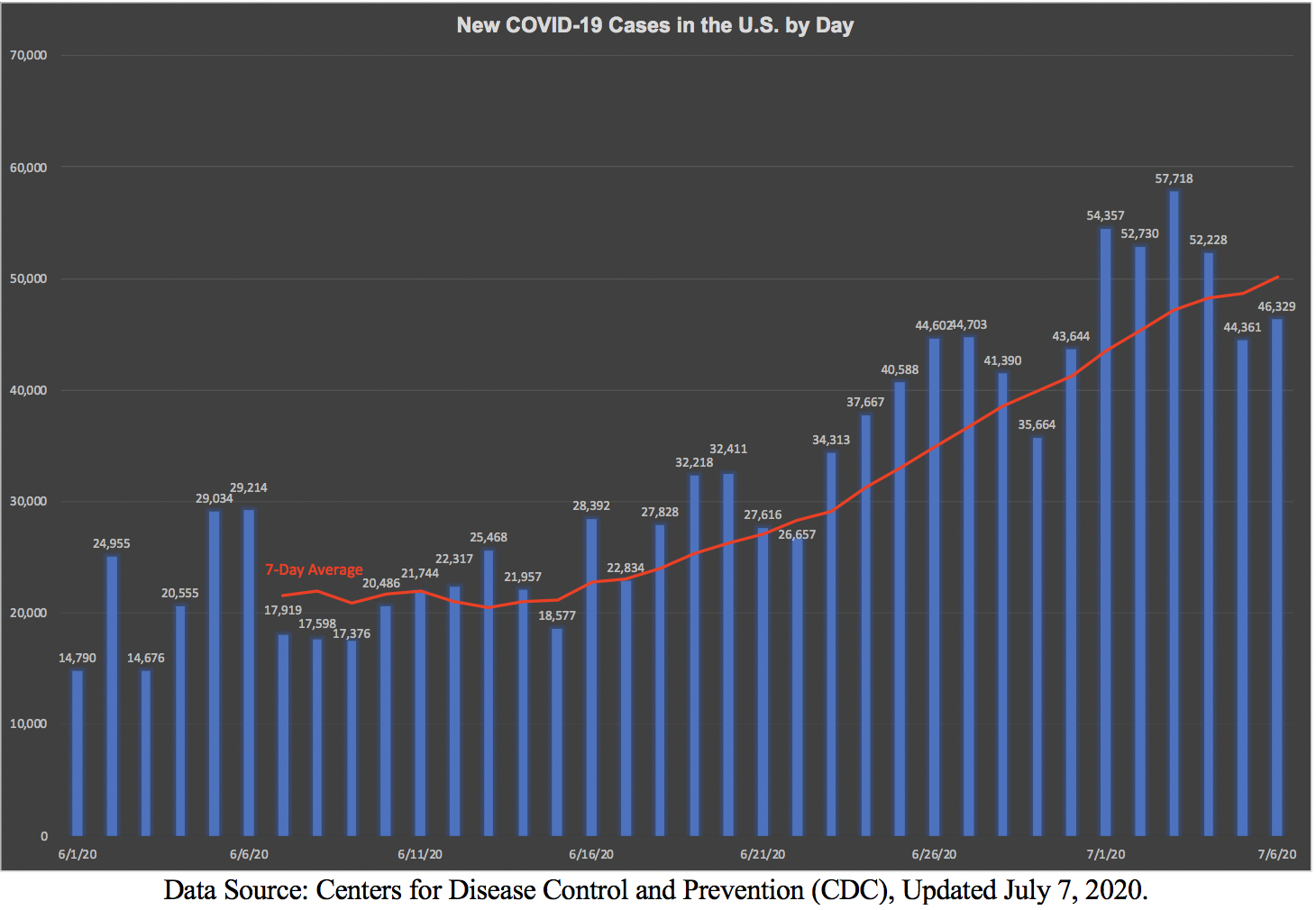 Although cases appeared to be slowing in Pennsylvania, on July 6 the Commonwealth reported nearly 1,000 new cases, a level that hadn’t been hit since June 23, two weeks prior. Meanwhile, the rate of cases in Lancaster County continues to grow at a pace much faster than the Pennsylvania average. In the month of June, Lancaster County’s rate of cumulative cases increased by approximately 1,200 cases per 100,000 residents, more than ten times the average increase in Pennsylvania (119 cases per 100,000).

While other schools in Lancaster County, such as Millersville University, have also announced their intentions to return to campus in August, F&M’s location in the City of Lancaster may come with an added risk. While nearby Millersville has only 46 confirmed cases, the five-mile radius that F&M is located within has 882 total cases as of Tuesday.

Although the College has formulated a detailed plan for how the academic experience will look in the fall, most other details remain unknown. Plans for how housing, dining, and the staggered moving-in process will work have yet to be announced, in large part because they are still being formulated. Following the announcement to return to campus in the fall, the College sent a survey to returning and incoming students regarding housing.

F&M’s decision to announce its intention to return to campus in the fall despite not having solidified plans for how the residential experience will work reflects two broader challenges that colleges and universities across the country are facing.

First, planning for a fall semester that diminishes the risk of coronavirus transmission on campus is, many experts say, impossible. In a letter published in The New York Times last week, Laurence Steinberg, a psychologist and professor at Temple University who specializes in adolescent psychological development, denounced many schools’ plans to return to campus in the fall as “unrealistically optimistic” and “border[ing] on delusional.” Steinberg and several other psychologists, public health, and education experts have recently criticized colleges for deciding to return to campus, pointing to the high likelihood that outbreaks will occur on campuses, no matter what measures are taken to limit the risk of transmission.

Already, some schools that originally planned on having primarily in-person instruction for the fall—as F&M plans on doing—have begun to roll back those plans, determining that the continuing increase in coronavirus cases across the country makes a fall with in-person instruction too big of a health risk.

The second challenge facing colleges in their decision to reopen in the fall is a matter of money. The financial difficulties—particularly for small liberal arts colleges—that have been brought on by the pandemic make the prospect of not returning to campus for residential learning in the fall a dire one for most colleges. Many industry experts have predicted large decreases in enrollment across the country and severe revenue losses for most schools, forecasting that colleges with massive billion dollar endowments will be able to endure the financial difficulties associated with the pandemic. For schools without the rainy-day funds of schools like Harvard, Yale, and Stanford, the future will likely be bleak.

The program, which the College hopes will be able to draw in other students from China and across Asia who are unable to return to the U.S. for the fall semester, was also the subject of a letter signed by several F&M faculty members that raised multiple concerns about the program to the F&M administration. The letter, which was shared with The College Reporter, raises concerns about academic freedom violations, particularly with regards to electives such as Connections courses, which the faculty members worry cannot be adequately taught in an environment of censorship that limits academic freedom.

The financial worries aren’t just due to the loss of international students. The admissions records shared with The College Reporter also show that F&M remains short of its target number of incoming first years with F&M’s smallest class size in years all but inevitable for the fall.

F&M, like many other small private colleges across the country, faces the troubling fact that if it were to decide to remain online in the fall it may lose even more of its freshman class, with students transferring to schools that will reopen, deciding to take a gap year, or taking courses at schools that are cheaper and closer to home. In 2019, the College brought in nearly $22.5 million from room and board—more than 15% of its total operating revenues. If even half of that revenue was lost in the coming year, the College would likely have to take extremely drastic measures in order to stay afloat financially.

One current F&M upperclassman found the decision to return to campus in the fall troubling. “The college has clear financial incentives to have the fall semester on campus,” the student said. The student also raised concerns about the likely transmission of COVID-19 on campus,  “I find it very hard to imagine young adults following social distancing protocols.” “Health care providers are doing their best to save the lives of numerous patients,” the student said. “Why are we going to potentially increase the spread of COVID-19 for selfish reasons?”

Other incoming first years were more critical of the College’s decision. “I found the College’s plan to return this fall extremely lackluster” one first year said. The future student acknowledged that “this is a learning experience for everyone” but said they ”still feel extremely in the dark.” The incoming first year said that although they plan on coming to campus in the fall, “the announcement did not ease my mind or help me anticipate what college would look like in the fall like I had expected it would.”

Junior Daniel Robillard is an Investigative Reporter for TCR. His email is drobilla@fandm.edu

—Did you receive money from F&M through the CARES Act funding? Was it less than you expected? More? The College Reporter wants to hear your experience—email drobilla@fandm.edu

2021 Lancaster Election Results: How Important is it to Vote?

2 thoughts on “A Semester of Unknowns—Financial Crises, Admissions Troubles, and Skyrocketing Coronavirus Cases Puts F&M in a Bind for the Fall”

How to Recover from a Subpar Academic Performance during the Pandemic