The 2021 NBA playoffs have been interesting to say the least. We saw the likes of Lebron James and Jimmy Butler make early exits in the first round, both of whom played in the Finals last year. We saw another memorable playoff performance by Damian Lillard, just going absolute diabolic. We saw Luka and crybaby Porzingis get bounced in the first round by the Grim Reaper himself in Kwahi Leonard. I know that Luka is not happy in Dallas, and I’ve seen reports that he wants out and wants to sign a supermax elsewhere.

One thing that I want to make sure of is this: as a Knicks fan, I have fully convinced myself that Luka Doncic WILL sign a supermax this summer with the New York Knicks. Please credit me for all the stories. Thank you. 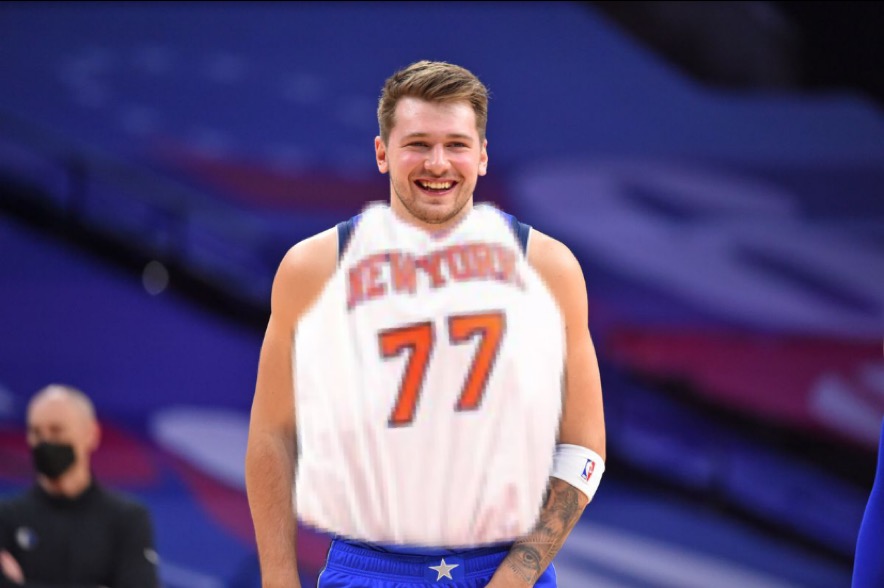 I think this is going to be a very entertaining playoffs when it is all said and done. The lack of many of the familiar contenders in this year’s playoffs opens up the possibilities for a new team to win a championship. There are a few teams left that have never even won a championship, yet alone been to a finals. So, I, as a fan of the game, am excited to see a new face bring home a shiny new Larry O’Brien trophy.

I think it is safe to say that the Suns are most likely the favorite team in America right now. What I mean is that all of the fans whose teams stink and didn’t make the playoffs were jumping on the Suns bandwagon, myself included. The Suns are also arguably hitting their peak at the absolute right time. Like the rapper Drake said in his smash hit song “Sicko Mode” by Travis Scott, it’s “wet like I’m Book” and my man, the man, Devin Booker is soaking!!! All jokes aside, I think the Suns would be the last team I wanted to play right now if the Knicks were still in the fight. Disclaimer: As I wrote this I was not aware that Chris Paul might have Covid and be out for a serious chunk of time, so if that is the case it gives the Suns a far more challenging road ahead of them. They also have the “Suns in Four Guy” on their side, who appeared in an all-time viral video of him just absolutely dogging two Nuggets fans who apparently poured a beer on him. After he dismantled the two losers he threw up a “Suns in Four,” and the rest was history as the Suns ended up sweeping the Nuggets in four.

The reason I have the Clips here is because of Kawhi. We saw what happened when he was in Toronto, ultimately willing a team to a Finals and then winning it all for a sub-par Raptors team who was usually a first round exit in the East. But without Lebron and AD and no Jamal Murray, the West doesn’t have that superstar player that Kawhi and the Clippers would possibly have to go up against. It’s an open bracket with a lot of different possible outcomes. The Clippers have talent so if all aligns right I could easily see them make a run. If Kawhi does pull off a championship I bet that a lot of people would start saying he has a better legacy than Lebron. I would respond to those people by saying “you’re crazy,” but I see why it makes sense in some people’s minds. This dude Kwahi was made in a lab, there’s no way you’re that normal for your whole life. I mean this guy Kawhi is so regular he could star on the regular show. Disclaimer: Also while writing this I got the news that Kawhi may be out for the series with a knee injury. If that is the case, the Clippers have 0 chance at a title. Paul George stinks if you ask me and has been non-existent in the playoffs in recent years. I am sure he is a good guy but he is essentially a taller Danny Green when he is out there.

Here are a few screen grabs from the LA vs. DAL game a few days ago. Both images were taken after Paul George (left) airballed a 3-point shot. Kawhi Leonard (right) couldn’t believe what he had just seen. He is looking at PG like “I’m gonna beat that *** if you do some dumb shit like that again”.

This may be a tad biased because I watched this team mangle my sweet, sweet Knicks. I will also preface this take with the fact that I think the 76ers are borderline fraudulent. The Hawks can play basketball though. They have a solid rotation of about 7 guys who get big minutes, and they all play very well together. They are similar to the Suns in the way that they saved their best basketball for the playoffs. They also don’t miss any free throws, shooting right under 85% throughout the playoffs. They play hard and have a great atmosphere when at home with lots of ATL rappers hanging out and flexing courtside. The Hawks sidelines look like the 2018 XXL freshman class came out for fashion week on a nightly basis. They also have Lou Will, who if you didn’t know is an ATL legend for his frequencies at Magic City strip club, where you can try out his wing flavor. Because the only reason he goes so much is because of the “WINGS.”

This team is without a doubt the most talented team left. They have 3 superstars in KD, Kyrie, and Harden who are virtually unguardable. The reason I have them so low is because we still don’t know for sure the extent of Kyrie and Harden’s injuries. Regardless, we saw KD explode last night for 49/17/10. He is also 7ft tall while doing that which could be the topic of an entire other blog about how absurd that is. Not once in my life would I think another team in the NBA could beat the Nets in a 7 game series if they were healthy. When they are not healthy it’s a toss-up. In my opinion, besides their big 3, not a lot of those other players have the experience to deal with the big moments that are coming. I am also slightly hoping that they make it to the Finals and get to play the Suns. The coach of the Nets is former point god Steve Nash who played most of his career in Phoenix where he is beloved.  It would be quite the story if Steve Nash finally won a title as a coach for Brooklyn, after never being able to deliver a championship in his playing days to the city of Phoenix. Would it tarnish his legacy in Phoenix, who knows, so let’s find out!

Yes, I know that the Lakers lost in the first round to the Suns. Yes, I know Lebron left the court with 5 minutes left in every game to go get treatment. Yes, I know that AD is out. But…one thing that is never in doubt is Lebron getting “special treatment” from the league along with commish Adam Silver. A recent example of this special treatment is that Lebron was not punished when he celebrated his brand new Tequila release during the season while some Covid protocols were still in place.

Quite the crew in this photo, fire not going to lie.

Imagine if Lebron got the NBA season suspended because he was drinking tequila with A-list celebs. It would’ve been the most bizarre story ever and been talked about for a long time if you ask me. Nonetheless, if you know the NBA you know Lebron gets special treatment at times so why not give them a rematch series and put them back in the playoffs? I could see it happening, especially if the Nets lose. This situation would be similar to how last year Adam Silver just changed the entire way that the playoffs were going to be formatted just so Zion Williamson and the Pelicans could make the playoffs and help the TV ratings when money was a little too tight up top. So, all we can do is wait and see. He is King James for a reason ,and this would be an all time story if it happened. Realistic? No, definitely not. But, if this does happen please credit me and only me for this idea because I haven’t seen it anywhere else yet.

These NBA playoffs are going to get more and more exciting the more the big time stars fall out. Just good basketball with players we only know because they did 5 years at Kansas and Wichita State, or were NCAA heroes at some mid-major school. I appreciate the little guys getting their shine on, making big plays in big moments just like the big dawgs. Everyone loves an underdog right? Just like that movie Tudy or whatever it’s called.

Senior Jack Gilroy is a staff writer. His email is jgilroy@fandm.edu.