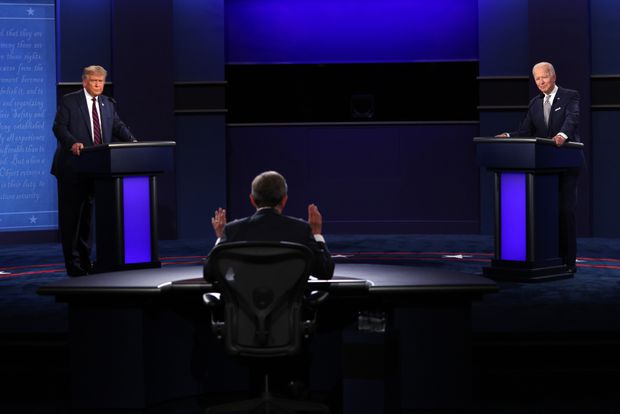 With just one month left until Election Day, the first presidential debate underscored the tumultuous political climate as the nation copes with the Covid-19 pandemic, racial injustice and economic recovery. Here are some fact-checks and main takeaways from Presidential Incu mbent Donald Trump and Democratic Nominee Joseph Biden.

President Trump argued that there are certain Democratic-run cities and states that are preventing poll watchers from their rightful duty to monitor official voting centers. “Today, there was a big problem: In Philadelphia, they went in to watch, they were called poll watchers, a very safe, a very nice thing. They were thrown out, they weren’t allowed to watch. You know why? Because bad things happen in Philadelphia.”

The president’s perspective on this is based on a Philadelphia Inquirer story that describes a woman hired by the Trump campaign being rejected from a PA Board of Elections satellite office to watch the early voting process (which started on September 14th). In response to this situation, Philadelphia deputy commissioner Nick Custodio, released in a statement:

At the same time, when asked about accepting the results of the election, President Trump promised that he would battle a “rigged” election.

While this statistic from an APM Lab report is accurate in terms of the death rate disparity at this point in the pandemic, Nominee Biden did not address how this will be affected by the end of this year. The Biden campaign has not followed up yet with a follow up by NBC News.

When Trump was confronted by Biden on Kellyanne’s arguments that “riots and chaos help [Trump’s] cause, he disputed it outright. The original controversy stemmed from a late August interview on Fox and Friends where she said, “The more chaos and anarchy and vandalism and violence reigns, the better it is for the very clear choice on who’s best on public safety and law and order.”

This statement was made four days after announcing her resignation from the White House.

Did the Trump administration bring back 700,000 manufacturing jobs?

According to federal unemployment data, Trump brought back roughly half a million manufacturing jobs between 2016 and 2019. Due to the pandemic, there are now nearly 200,000 less jobs in this sector than at the start of the Trump administration.

Is Biden’s Climate Plan any different than the Green New Deal?

Even though Biden brands himself as “the Democratic party”, he attempted to distinguish himself from the progressive wing of the party by not definitively supporting the Green New Deal. Under the Biden Climate Plan, the United States would reach carbon neutrality by 2050 and create 10 million clean energy jobs,  just like in Bernie Sanders (I-VT) and Alexandria Occasio-Cortez (D-NY). Similar environmental groups that supported the Green New Deal also came out in full support when these plans were published this summer

Trump has relied on family values to employ support from Evangelical Christians, his main base of support when asked about the state of Democratic run cities and competitive in states run by Democratic governors, including Pennsylvania, Minnesota and Michigan.

Biden stressed that violence is never appropriate. Biden emphasizes a balance between local law enforcement, local psychologists to talk people down as well as community policing that consists of community members themselves.

Trump did not condemn white supremacists and continued to exacerbate the threat of Antifa (anti-fascists), in spite of his own FBI Director testifying to Congress that it is an idea, not an organized group.

This is not the case for right-wing militias and paramilitary groups (a.k.a. boogaloo movement) that are highly organized and have been the main cause of violence to once peaceful protests in Kenosha and Portland (find source)

Trump has relaxed fuel efficiency standards and energy costs, emphasizing the cost-effectiveness of natural gas, while Biden’s focus is to incentivize renewable energy in the nonrenewable industry and infrastructure that already exists.

A lot of money is spent on hazard recovery funds from natural disasters nationwide, in Ohio and other midwestern states, that have not usually had to deal with it as frequently in the past.

Biden encouraged numerous ways to vote and that no one, especially the president, can’t decide if you vote.

Trump is targeting PA and Philadelphia mail-in ballots, trying to sow confusion about voting and drumming up support in a crucial 2016 battleground state.

Junior Max Sano is a Staff Writer. His email is msano@fandm.edu.