Ben and John, F&M’s mascots since 2007, have taken a hiatus from the spotlight in recent years. Image courtesy of Franklin & Marshall College.

As admitted students eagerly populate Franklin & Marshall’s campus and fans cheer in the stands at home sporting events, there are two key figures missing: Ben and John. The two goofy cartoon mascots, representing the school’s namesakes Benjamin Franklin and John Marshall, have served as the figureheads of the college since their debut in 2007. However, the dated costumes may no longer embody the ideals of the college community, especially after the recent controversy surrounding the men they depict.

What’s in a name? This challenge is one that the Franklin & Marshall community has been grappling with for close to a year. On June 15th, 2021, when new revelations over the biography of John Marshall in The Atlantic defamed him as a heinous slave trader, owner, and pro-slavery judge, the college was left with a difficult decision. How do we move forward while carrying the immense weight of our past?

The Atlantic article describes how the University of Chicago removed John Marshall as the namesake of their law school, with the Cleveland-Marshall College of Law at Cleveland State University considering similar action. It also includes a footnote reading: “This article previously misstated that Franklin & Marshall College in Pennsylvania is considering changing its name. In fact, the college says it has had no official conversations on the subject.” In the time since, Franklin & Marshall College has not made any moves to alter its name, despite calls by students and the wider community to consider a rebrand. Publicity from the vandalization of the Manning Green statue of John Marshall, the reprinting of the original article in Lancaster’s LNP, and an eye-opening article in The College Reporter further sparked conversations surrounding the namesake. 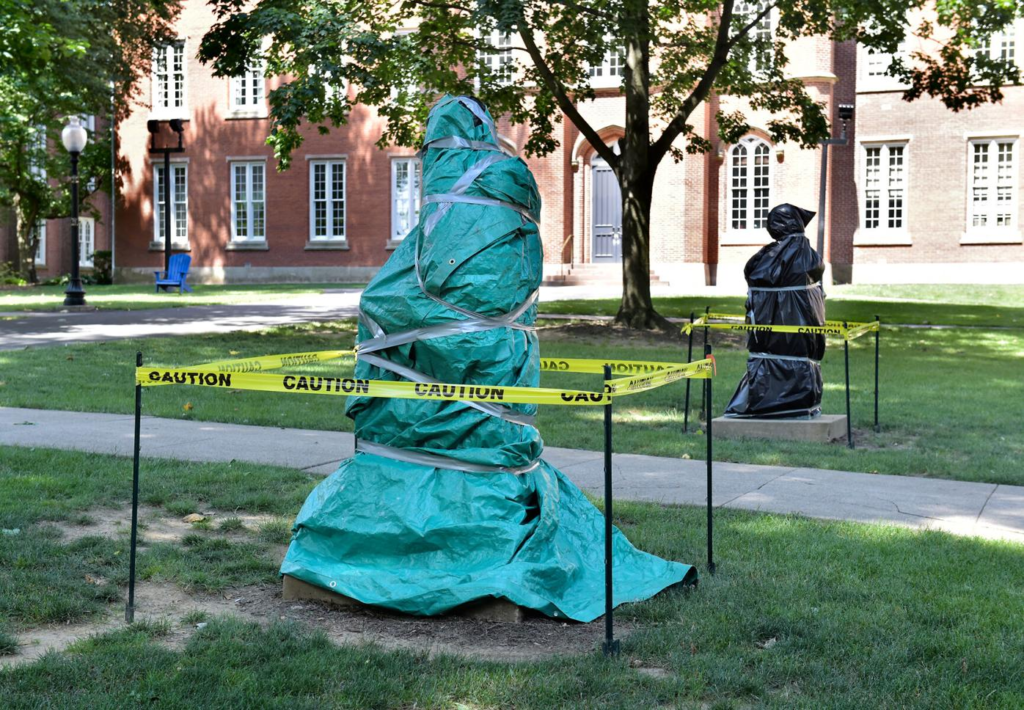 The Phillips Collection’s statues of John Marshall and Benjamin Franklin, draped in protective tarps soon after the vandalism on Manning Green. Photo courtesy of the LPN.

Last year’s discovery does not discount Marshall’s contributions to American law and the founding of our country. However, by failing to acknowledge the troubled history of our school’s namesake, we excuse him for his biggest faults. We follow the lead of centuries of history books that shied away from confronting the problems of slavery and race in the United States to preserve the image of the “Great Chief Justice.”

Vice President of Diversity, Equity, and Inclusion Gretchel Hathaway agrees that this history, no matter how ugly, “needs to be told.” After the article in question was published last year, Hathaway and a committee of faculty, librarians, and administrators began working to uncover the college’s connections to slavery and colonization. With the help of Anna Boutin-Cooper, college librarian, and Dr. Louise Stevenson, professor of History, Hathaway has brought F&M into a larger consortium under the University of Virginia of Universities Studying Slavery. While the group is currently in the process of writing about their findings, Hathaway says that they plan to unveil their work in the fall of 2022. Their goals moving forward are to use the information gathered to educate the campus community about both the positive and unsettling history of Franklin and Marshall College, as well as the other colonial and discriminatory practices from our past.

The group is not currently pursuing the removal of Marshall from the college’s name, however. Hathaway notes that this step would only be erasing our history, rather than reckoning with it. She believes that by owning our past, we as a community will only become stronger, more aware, and inclusive.

These attributes represent us as Diplomats more than the current Ben and John mascots. Dean of Student Affairs Margaret Hazlett agrees that two old, white men are not the images we should cheer for. To her, being a Diplomat is the spirit of global citizenship and leadership. The mascot costumes and the men they represent do not embody this spirit.

So for now, ‘ole Ben and John take a hiatus from the limelight, but it may be time we consider retiring them for good. Over the 234 years of F&M’s existence, the image of the Diplomat has become much more diverse, global, and inclusive. As Hazlett says, “We are the Diplomats”— we as students represent our community far better than any mascot ever could.

Sophomore Lily Vining is the Campus Life Editor. Her email is lvining@fandm.edu.